The thing that still amazes me about Europe is how easy it is to get around and be in a completely different country in almost no time at all. It’s definitely a highlight for any traveller from countries like Australia where we could travel for two hours and still be in the same city! The best example of this are the cities of Vienna and Bratislava – both capital cities of their respective countries, they’re only 55km apart. During our stay in Vienna, we decided to take a day trip to Bratislava on the train which took only an hour. 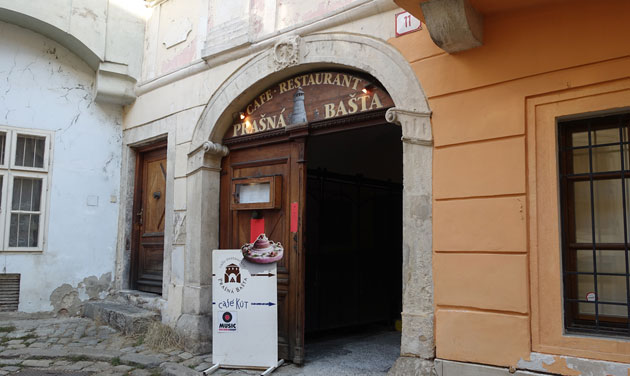 Of course, one of our priorities was around ensuring that we could have a ‘Slovakian’ meal for lunch, at a restaurant that was close to the city centre. Tripadvisor pointed us in the direction of Prasna Basta, reputed to be a restaurant frequented primarily by locals, despite its location in the Old Town. When we get there, I can see why this is the case – to get to the restaurant, you have to enter through an external door, walk through an internal courtyard, then through a dark corridor before you get to the warm restaurant bustling with the conversations of local workers and students.

We’re easily the only tourists and it’s not until we finish our meal and leave that another foreign couple (American?) enter the restaurant. The waiters were very nice to us though, switching effortlessly from Slovakian to English when they realised that we couldn’t understand them. They quickly dropped off some translated menus for us, and took our drink order of sparkling water.

We ordered a salad to start – an Armenian Salad. I had no idea what an Armenian salad would be, but I was expecting something a bit more than grated carrot soaked in a spiced mayonnaise with three solitary olives on top. Disappointingly, I later learned that it isn’t even Armenian – I asked my friend Maren about it, and in her words, “I have never heard of this and have never had it. FAKE!”. I wouldn’t recommend ordering this salad starter!

My choice of the main was a lot more satisfying – Veal stew with butter dumplings. Having never tried this type of butter dumpling before, I was very pleasantly surprised. I’d expected quite a heavy stodgy kind of dumpling, but despite the butter content of this dumpling, it was actually very light and tasty. Combined with the rich veal sauce, it was just absolutely delicious. The veal itself was cooked very well too, and you could tell from its tenderness that it had been simmering for a good few hours.

K opted for the daily special of the Confit Duck Leg. Not quite as good as the duck confit we had at Mon Canard in Toulouse, but still quite well-cooked and definitely enhanced by the soft salted red cabbage that it was served with. The bread dumplings were herbed and flavoured, but I thought that they didn’t quite measure up to the standard set by the butter dumplings in my dish.

We finished our meal by sharing a dessert – the Hungarian cake with cream. It’s not a particularly descriptive title – with the varieties of Hungarian cake available, what was it exactly? It turned out to be like a somloi galuska, or a trifle made with sponge cake, pastry cream, raisins, walnuts, chocolate sauce and whipped cream. I’ve not tried a somloi galuska before and after the fiasco with the ‘Armenian salad’, I do wonder whether this was a faithful version. Still, you really can’t go wrong with chocolate, sponge and cream – sinfully sweet, and definitely a dessert that I recommend sharing between two people.

Overall, I think Prasna Basta is probably a good example of a decent Slovakian restaurant. I would recommend ordering only main dishes though – entrees seem to be a bit hit and miss, and desserts are a bit too filling. Order your main dish here at Prasna Basta and enjoy some traditional Slovakian dishes, before moving on elsewhere in the Old Town for coffee and dessert.

As for the rest of our day in Bratislava, we were luckily blessed with good weather so spent most of the time walking around the Old Town and up to the castle for the view. It is a bit of a shock to go from the ornate splendour and beauty of Vienna to the grim greyness of a post-Communist country, and I don’t think we’ll really understand the full scale of the impact of Soviet Union until later in our trip when we visit Russia and various countries in the Balkans.

What I did find interesting is the way they’ve tried to liven up the city centre after the fall of the Soviet Union. Some of the post-Communist additions include interesting pieces of street art (I liked the man in the manhole!), including sculptures, murals, and even buildings.

Bratislava is a worthy daytrip if you’re spending some time in Vienna – it’s an interesting change of pace, and very educational if you’re interested in the role of the Soviet Union in 20th century history. I don’t think it necessitates a longer stay though- one day is largely enough to take in most of the inner city sights.